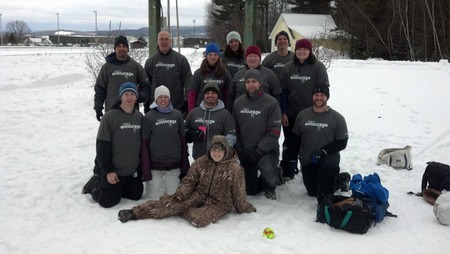 View full-size image
Is this photo a winner?
"We created a design for a charity softball tournament in Vermont that raised $25,000 for two teenage girls that had different forms of cancer. 100% of the proceeds went directly to the families and there were 68 teams involved in the event. We know one of the girls, Ashley, who was able to join us for the picture. She's battling Leukemia and although she wasn't able to play, she is front and center in the picture. We had a great time in the tournament and looked sharp in our shirts with designs on the front, the back and recongizing our sponsor, the Vermont Captive Insurance Association on the sleeve. Thanks for the quick turnaround on the shirts." - Eric Gilcris (Mar 08, 2013)