Winning isn't everything, its the only thing! WIEITOT!

Coach Patrick J. DiPaolo was diagnosed with Lyme's Disease, a life threatening illness, over 5 years ago. The initial diagnosis gave him 1 year to live but he battled on for 63 months and never stopped fighting!

Please honor and support Pat by purchasing one of these t-shirts to help raise money for the scholarship fund! 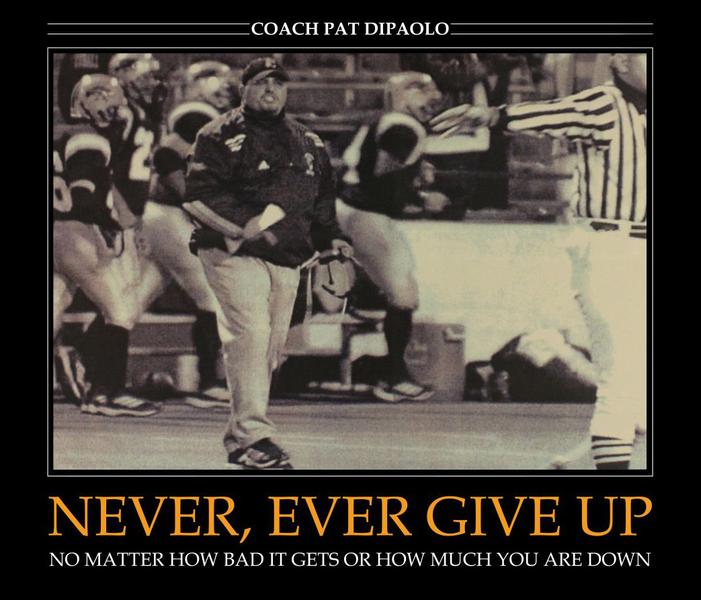 Patrick lived his life based on the acronym W.I.E.I.T.O.T. – Winning Isn’t Everything, It’s The Only Thing. This famous saying by legendary football coach Vince Lombardi so inspired Patrick he made it his personalized license plate. After his initial diagnosis in September 2008, Patrick was told he only had a year to live. Bound and determined to face this disease head on, Patrick fought like he did in everything he set out to do in life. No matter how bad things got, Patrick always fought on. For 63 months, Patrick battled until he went into cardiac arrest on Monday, August 19th, followed by his passing Thursday, August 22, 2013, ending his courageous fight.

The beloved son of District Judge Dominick and Janet Colao DiPaolo, Patrick was born on March 14, 1969 in Erie, Pa. He attended Sacred Heart Catholic Grade School and graduated from Cathedral Preparatory School, Class of 1987. Patrick was a three-sport letterman in football, wrestling and baseball. He received a scholarship to Thiel College where he starred in football and baseball. He was named a co-captain of the baseball team. He served as vice- president of the Delta Phi Kappa fraternity. After graduating from Thiel with his Bachelors degree in Graphic and Fine Arts, he was hired as an assistant baseball coach for the Thiel Tomcats, coaching for two years.

Returning to Erie, Patrick enrolled at Edinboro University where he earned his Elementary, Secondary, and Masters Degrees in Education. After graduation, he was employed by the School District of the City of Erie. Patrick began his years of service to the school district by serving as a teachers’ aide at Perry School and then as an art teacher at Roosevelt Middle School and Central High School. With football as his passion, Patrick returned to his high school alma mater and served as the head junior varsity coach at Cathedral Prep, winning three JV Metro Championships. He then took over the Central football program as its head coach. One of Patrick’s goals at Central was to bridge the disconnect that grew among fans and alumni of the former Tech Memorial and Academy high schools when the schools merged to become Central in 1992. He formed the Tech, Academy, and Central Alumni Foundation, designed to reach former students, players, coaches and teachers and get them involved as boosters of Central’s athletic programs. After establishing T.A.C., Patrick organized a golf tournament and used the proceeds to build a state- of-the-art weight room for all student athletes at Central. In 2002, Patrick lead the City-All-Stars to victory in the Save An Eye football game. The City scored on the first play from scrimmage on a halfback pass, called by Coach DiPaolo. This was the fastest score by any team in the 75-year history of the All-Star game.

He returned to Edinboro University and continued his post graduate work and earned his Administrative and Superintendent Certificates. At age 33, Patrick became Assistant Principal at Central. He then was named the first principal of the Flagship Transitional School. In 2005, Patrick accepted the Principal position at East High School. This was his final placement until he was forced to resign due to his illness.

At East High School, Patrick established an annual golf tournament that benefited athletics at the school. He quickly became known as “Chef DiPaolo” among the students and faculty for the spaghetti dinners he would serve with his mother’s homemade recipes for sauce and meatballs as a way to raise money for the school and for charities.

He enjoyed playing Modified and Slo-Pitch and went on to manage many teams. He also enjoyed playing golf. He was an avid fan of Notre Dame football, the New York Yankees, and the Oakland Raiders. In July 2013, Patrick was honored in the 75th Anniversary Save An Eye Game book, recalling his selection as a player and later a coach.

Patrick cherished his family and friends. From his marriage to Beth Pope on February 21, 1998, to the birth of their children, Julia and Dominick (Nico), to the many friends he made through the years, Patrick embraced all of them. Beyond the football fields and the classrooms, Patrick had many interests and hobbies. Patrick loved to cook. Many times he would open his home to friends and family to enjoy the tasty meals he cooked. Patrick was also the artist. He created many pieces of beautiful art, some of which are proudly displayed in his families’ homes and offices. His greatest display of artistic talent was the family home he built for Beth, Julia and Nico in 2006.

Patrick’s pride and joy were his children. Julia was his dancer and biggest cheerleader (his princess). He enjoyed watching her talents grace the stages at many dance competitions. He was excited his niece, Gianna, followed Julia’s footsteps into dance as well. He was especially proud that his love for drawing has become a love of Julia’s. Patrick donned a baseball cap one last time when he decided to coach his son’s baseball team, reveling in enjoyment in coaching his son, Nico (the apple of his eye), and his nephew, Gino. Throughout Patrick’s illness, Nico was by his father’s side. Patrick, Beth, Julia and Nico greatly enjoyed their time together while on vacation at the University of Notre Dame and the Outer Banks in North Carolina just as much as quiet days spent together at their home.