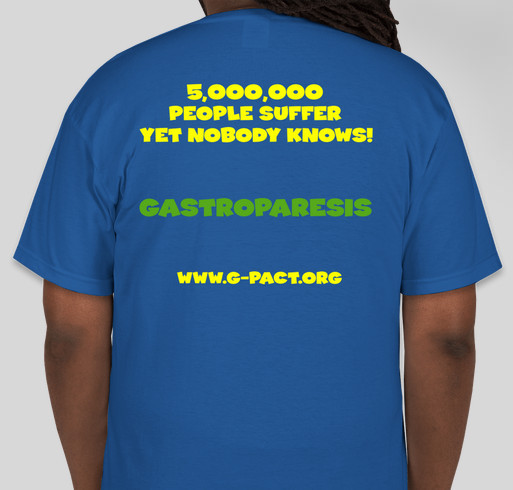 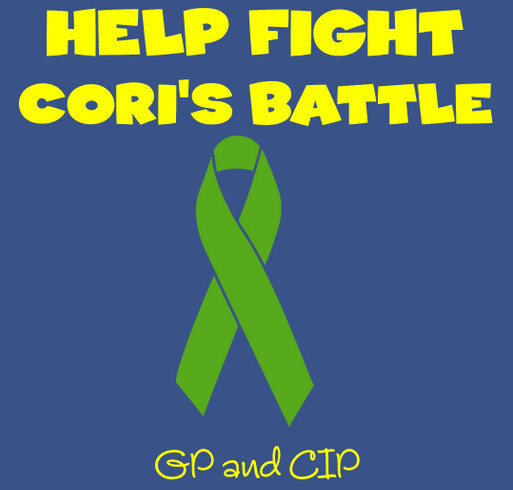 Help me raise money for GP and CIP awareness!!

5,000,000 people suffer from Gastroparesis and chronic intestinal pseudo-obstruction, yet there is no cure and very true treatments. Please join me in raising money for research and help spread the word for this disease that takes lives and permanently affects lives.

I am Cori Burke and I am 23 years old, here is my story and details about Gastroparesis and Chronic Intestinal Pseudo-Obstruction.
I vomited in my sleep beginning at the age of two, but not enough for my parents to think, "oh something bad is wrong." As my life went on my vomiting became worse, in sixth grade I was diagnosed with acid reflux. Ninth grade came around and my mom took me to a pediatrician because I just didn't feel good, I had little energy, and was not a normal 14 year old girl. After an EGD (scope down the esophagus to the stomach) I was told I much have severe good allergies by the irritation in my stomach. As high school went on my ability to eat grew smaller and smaller. I had an episode of vomiting one night where hives from head to toe and burning all over the body followed. We went to the ER, it happened again 10 days later and the allergy appointments began however I showed up with ZERO food allergies. Then the preservative testing began which was also negative. By Christmas time when I was 19 I help down very little of my meals, on December 31 I completely lost my appetite trying to prepare for new years I couldn't stay out of the bathroom...SO MUCH vomiting and diarrhea, every 3 minutes until I was very dehydrated. I went to the ER and spent new years there  I had a fever for 104-105, vomiting, and diarrhea for 4 days...then the fever dropped, the diarrhea stop, but now I am 23 and have not held down a single bite of food. Doctors appointments and no one could figure out what was wrong. I went through multiple testing, months at a time hospital stays getting IV nutrients, in three months I dropped 60 pounds and I did not have 60 pounds to drop. I went through horrible doctors that would yell, "hold it down!!" Doctors who swore I had an eating disorder because I was a teenage, but I was not causing myself to vomit. I went through uncountable procedures and testing, 5 NG tubes, and G-tube, and a GJ-tube, none of which worked because things still went to my stomach. Finally I traveled to Cleveland Clinic where I was told if I did have a feeding tube bypassing my stomach straight to my intestines I wouldn't be there the next week. I was in the the last stages of malnourishment, appearance wise I lost my hair, my nails came off, and I was bruised from head to toe. I was then diagnosed with gastroparesis after a failed Gastric Emptying Study showing that I didn't digest food. I have my gastric pacemaker put in August of this year after finally finding a doctor in my state, my pacemaker has not began to work yet.

After my onset of GP and CIP I have developed microcytic anemia and receive blood transfusions, multiple auto-immune systems, a poor immune system in general, seizures, and permanent neurological problems due to GP medication side effects (seizure and stroke like episodes),kidney mass, and twitches and trembling. I have also been in a coma. I currently have a J-tube, a peg tube (to drain and protect my throat because I have Barrett's esophagus, a precancerous condition of the throat), and a gastric pacemaker.

Gastroparesis (GP) and Chronic Intestinal Pseudo Obstruction (CIP) are paralysis of the stomach and GI tract. You can have GP without CIP, but they go hand in hand. CIP is the muscles in the intestinal tract not working properly causing a pseudo obstruction in your intestinal tract. There are few treatments for GP and CIP, it is all trial and error. There are few medications that work or don't, but are also very dangerous and can cause life long neurological problems. Having a Gastric Pacemaker placed in your stomach is another treatment. Keep in mind this is not a cure, and may not even work. If affective the pacemaker will calm your nausea and vomiting and allow you to eat on a very strict diet. This does not take away flares (days where vomiting and pain is worse). GP and CIP patients experience severe pain, severe bloating, bowel problems, malnutrition, and sometimes even death. Have you ever thought about how much people rely on food? Of course. But have you ever thought about what a social act it is? Food at holidays, food with friends, on trips, vacations, birthday parties, pretty much every activity you engage. Do you know how hard it is to sit there, starving to death, but not able to take a bite of anything? Not ever having that feeling satisfied? People with GP and CIP can literally starve to death.

There are 5,000,000 people suffering from these diseases today yet I go to "major" hospitals and facilities and get blank stares when I tell my disease. People are dying, I know they are dying because I have met them in support group. People don't know they're dying because they don't know about the disease. There is so little research and awareness, so I ask you to PLEASE join me and help raise money for this cause. So that we can have a fair shot at a normal life and life in general. The number one cause of GP and CIP is idiopathic, meaning they don't know! Please share, get the word out....when people ask "What is that?" tell them. Let's get it acknowledged!! Thank you so much for your time!

Cori is an awesome young lady that my family was recently introduced to. We are so blessed that she is now part of our life! Stay strong Cori!

I was never even aware of it until I met Cori, and I love her and hate to see her going through this

Share Why You Support "Gastroparesis and Chronic Intestinal Pseudo-Obstruction Research"