Save the Diesel! Help Move History! Buy a shirt to save and move locomotive PH&D 52 today! 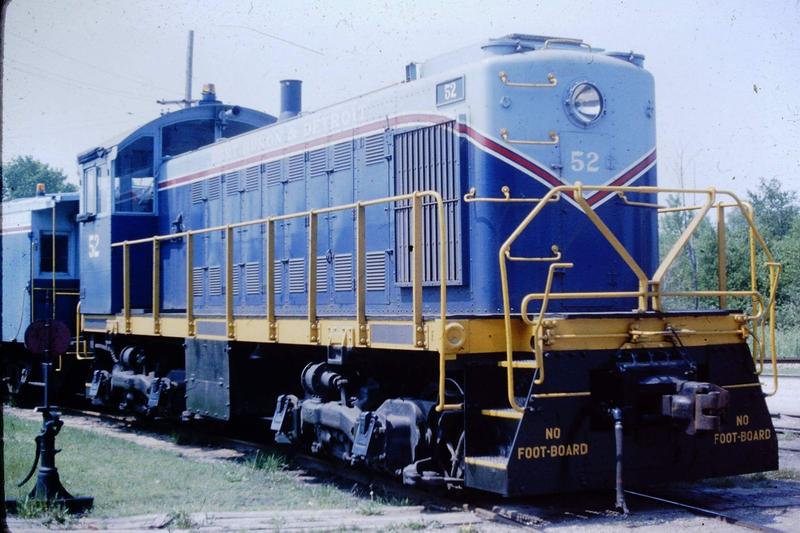 Locomotive PH&D 52 is truly a unique piece of equipment. It was one of two American Locomotive Works “switcher class” or S-1. It was erected at ALCO’s Schenectady, New York shops as the second of a small order for two locomotives. These locomotives were powered with the ALCO 539, capable of producing 660 horsepower. Both 51 and 52 were delivered to the Port Huron & Detroit Railroad in 1945, making it the FIRST railroad in the State of Michigan to be completely dieselized, and one of the first in the country (there were other smaller railroad that dieselized as early as the late 1920s). For the next 25 years or so, locomotive 52 was the secondary use locomotive, with locomotive 60 (an S-2 that was acquired in 1948 to replace 51 once it was realized more horsepower was needed). Then a used B&O S-4 was purchased, which made 52 strictly a yard switcher and back up power. When the PH&D was sold in 1984 to the Chesapeake & Ohio Railway, locomotive 52 was sold to Coe Rail of Walled Lake, MI, where it remained until 2008 when the successor company, Railmark, Inc. sold locomotive 52 to Knoxville Locomotive Works. In 2012, negotiations was started between the Port Huron & Detroit Historical Society and Knoxville Locomotive Works which led to the sale of locomotive 52 to the Society.

The Society’s primary interest here is to move PH&D 52 from Knoxville, TN to the PH&D office campus, which the Society purchased in 2007 (likewise also when the Society was established). The Society is looking to move locomotive 52 on flat car, which will involve a crane lift at Knoxville, TN, the rail move itself, then another lift at the wye and final placement. The Society already has over $14,000 in pledges from gracious anonymous donors. This is where you come in. With your financial support of buying our fundraiser T-shirt, you too can take part in preserving this unique piece of Port Huron & Detroit Railroad history, TODAY!

The Society wants you, the public to help us determine what to restore locomotive 52 to. So with this fundraiser, we are going to use sales and donations to determine which color the locomotive will be restored to. Will it be the two-tone blue scheme with red and yellow red and gray as delivered as you see with this T-Shirt offering? Or will it be red and gray as delivered? YOU DECIDE – VOTE WITH YOUR PURCHASE AND DONATION!

Retired CSX maintenance team. I am happy to support you!

My Grandparents the Seely's lived right behind the depot in Port Huron so I was nearly raised near the depot. I loved the trains and hung out at the depot alot. My Grandpa had his barber shop right across the street from the depot also.