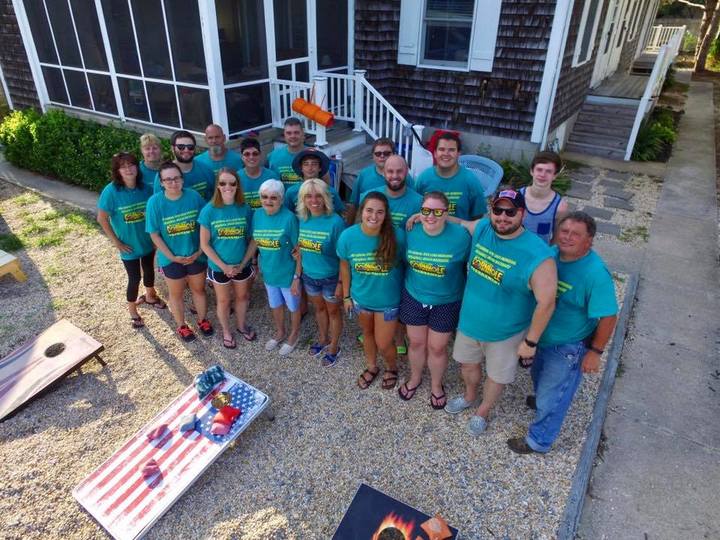 View full-size image
Is this photo a winner?
"In 2014, a family and a friend on vacation, gathered in Broadkill Beach for dinner and a friendly cornhole game. Everyone entered with $1.00. Partners were drawn from a hat and the winning team divided the pot from the entry fee. The following day, the family received a phone call, that the friend was in the hospital, on life support. He had had a brain aneurysm. Rick was 48 years old when he was suddenly taken from us. In 2015, the family returned to Broadkill Beach, and decided to make the game into a tournament, and order shirts from Custom Ink to commemorate the event. The teams were still drawn randomly from a hat, but entry fee was upped to $5.00 per person. Instead of the winners splitting the pot, the pot was donated to K9's for Warriors. In 2016, trophies were added. The winners of the tournament had 1 year bragging rights and the possession of the trophies. In 2017, the tournament had to be moved from Broadkill Beach to Dewey Beach. Although there was a change in venues, several things stayed the same. The name of the tournament remained the Rick Loux Memorial Broadkill Beach Backyard Cornhole Tournament, the total tournament proceeds from our entry fees were donated to K9s for Warriors (plus internet donations form outside donors), and the shirts were ordered from Custom Ink. Since 2015, we have ordered shirts for our family to wear during this annual tournament. All during the ordering process, Custom Ink employees worked with us to create great shirts, including picking the best color shirts to work with our designs. In 2018, Dewey Beach will again be the location of our tournament. Our thoughts will be of our friend Rick, and our shirts from Custom Ink. " - dls66 (May 17, 2018)