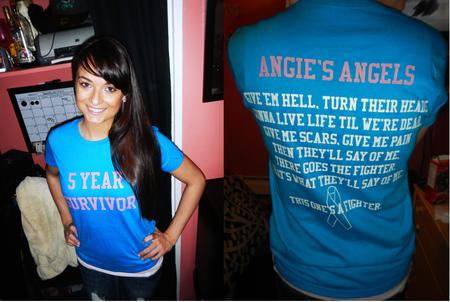 View full-size image
Is this photo a winner?
"I designed this "survivor" t-shirt for my 5th anniversary of remission in January. I was diagnosed with Cancer when I was 16 years old and when I was 17 my Oncologist told me I was in remission. He also told me that once I reached 5 years with no relapses then I could officially call myself a survivor. I had been looking forward to this anniversary every day since then! I wanted to commemorate this milestone with a t-shirt that celebrated my accomplishment.The moment I opened it, I loved it! CustomInk really made my remission anniversary memorable. " - Angie DiGiorgio (Feb 22, 2012)