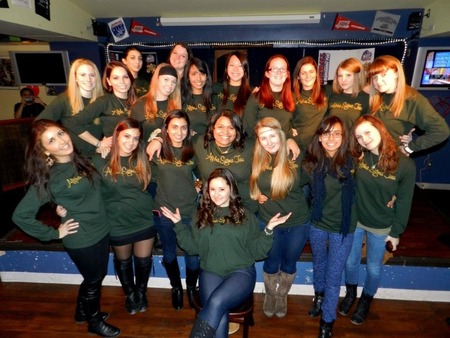 View full-size image
Is this photo a winner?
"Originally, we ordered the shirts as our rush shirts for this semester's recruitment process, but we love them so much that we've been wearing them to almost all of our other events as well:) This photo was taken after we held an eating contest to raise money for Babyland, which is a shelter for battered women and children in Newark, New Jersey. Our chapter of Alpha Sigma Tau sorority is from the New Jersey Institute of Technology and has decided to adopt Babyland as our local philanthropy. We hope to use our shirts as a unifying factor when fundraising and bonding as a sisterhood." - http://njitast.wix.com/betaupsilon - Alpha Sigma Tau, Beta Upsilon Chapter. NJIT (Feb 23, 2013)