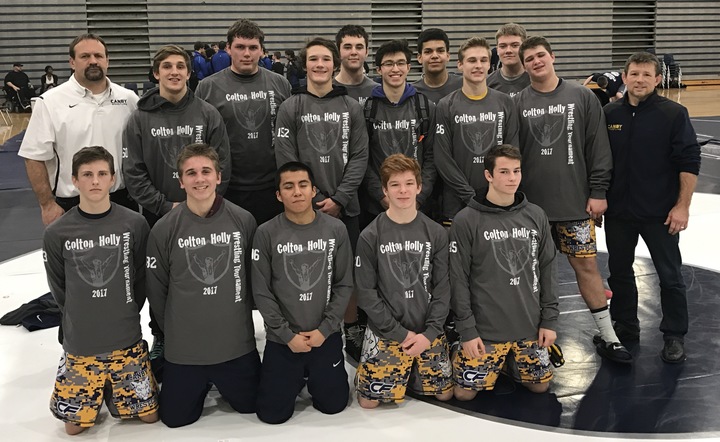 View full-size image
Is this photo a winner?
"The 6th annual Colton Holly Memorial Wrestling Tournament was held on January 21st, 2017. The tournament is held each year and is in memory of Colton Holly, who passed away on July 8th, 2010. Colton was an avid wrestler and he wrestled with a passion that was second to none. His passion and dedication to the sport are still felt throughout the school. This year, ten teams from around Oregon competed in the all day tournament. At the end of the day, the Canby Cougars emerged victorious. These 14 young men wrestled in more than five grueling matches each and represented their communities in a positive light! They are shown here wearing the CustomInk shirts that were given to the winning team. They are long sleeve t-shirts with their weight classes printed on the sleeve. Working with CustomInk was a pleasure as always. I had some questions prior to placing my order and both Katlan and Blake were patient with me, made sure we had the correct products and even suggested ways to save some money on the order. The bulk of our order was short sleeve t-shirts that were sold as a fundraiser. Thank you CustomInk for a great product, amazing customer service, and a seamless process from beginning to end. " - http://www.coltonholly.org - Brad Holly (Jan 27, 2017)