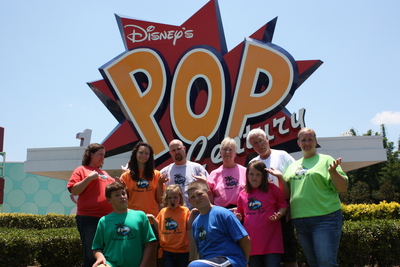 View full-size image
Is this photo a winner?
"We had originally ordered shirts for the Caribbean Cruise we were going to go on the week of June 12. When we got to the airport that morning, our flight had been cancelled. After spending at least an hour at the desk trying to figure it out, we got new flights.We had called the cruise line we were going on, and tried to extend the time to board the ship, but they couldn't get it past 3:30. By the time we got to Orlando, we missed the last shuttle by 30 minutes. It was 3:00 and it was a 40 minute ride on a fast taxi. We called several different numbers to try and catch another cruise, but we sadly couldn't book it because of short notice. After two hours to talking on the phone, we finally booked three rooms at Disney's Pop Century. It wasn't quite the week we had planned, but we wore our shirts proudly anyways. We plan on going on our cruise in December, so we can still wear our shirts! We love the quality, and the bright colors on all of them! " - vanvoorsts (Jun 21, 2011)