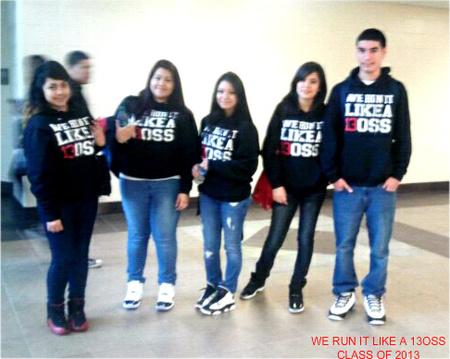 View full-size image
Is this photo a winner?
"Hoodies were designed by the students: Jacqueline, Yesenia, Valerie, and Paloma representing the class of 2013 at Klein Forest High School. We decided to create something different something unsual. In which we used our last two main class numbers "13" formed as the letter "B". To represent the word "Boss" something that is not seen in schools before otherwise that the school only makes shirts, bracelets, and etc. For seniors only so that is when we decided why don't we show them what we have in mind, "WE RUN IT LIKE A 13OSS" current Juniors and GO CLASS OF 2013. Special thanks to Alekks, Armando, Daniel, Genesis, Oscar, Roland ,Virginia, and CustomInk for supporting our design and being a part of this special memory. " - laboss2013 (Jan 17, 2012)