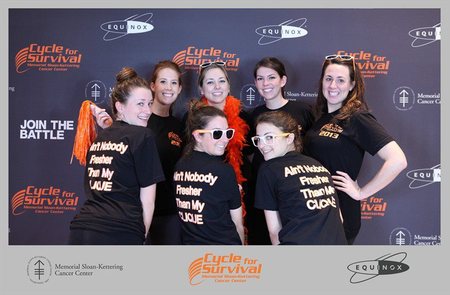 View full-size image
Is this photo a winner?
"Cycle for Survival is a great event that raises money for Memorial Sloan-Kettering cancer center. It is hosted by Equinox gyms around the country and is a really high energy, inspirational day. Each team is assigned a stationary cycle bike and your time is split evenly between the members for the four hour event. There were a bunch of fun free items (t-shirts, sunglasses, lip gloss, drawstring bags), and they offered free yoga & Pilates classes while it wasn't your turn to ride. The music kept everyone's energy up, and there were speakers every hour to talk about how Cycle has affected their fight against rare cancers, and it was a really touching way to remind you why we spent so many months raising money. My team name was Clique (from the Kanye West song) and it consisted of a bunch of my friends from home and college. It was such an amazing experience, and I'm so happy that we have these t-shirts to remember it by. The picture does not show our whole team (there were 11 of us in total) but everyone was so supportive the whole day ( and months leading up to it) that they deserve a shout out too! *When my delivery first came in the mail the front logo was in the wrong color, and when I called customer service about it they were SO NICE. Elizabeth Moeller is who helped me and she deserves a raise or something because she was awesome, and the mistake was quickly fixed and everything was perfect for the day of the event. " - http://cycleforsurvival.com - Gelsh (Mar 12, 2013)