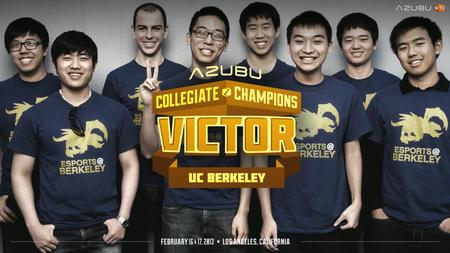 View full-size image
Is this photo a winner?
"eSports at Berkeley's Starcraft CSL team competed in the AZUBU Collegiate Starleague Season 6 against 315 schools from around the world for $90,000 in prizes. After qualifying for the live event in Los Angeles on February 16 by becoming one of the top four teams in the playoffs, eSports at Berkeley began to train extensively, and ordered CustomInk t-shirts for the club. The eSports at Berkeley team attended the live event and won their first match against Denmark's Aarhus University 4-1, securing their spot in the grand finals. Korea's Chunnam Techno University defeated the fierce University of Washington 4-0 and moved on to face Berkeley. Finally, in an extremely tense and nailbiting series, Berkeley came out on top in the grand finals 4-3 over Chunnam Techno University, becoming the first ever 2-time winner of Collegiate StarLeague and winning $40,000. The Berkeley team was praised as the most cohesive team at the event, and a lot of this had to do with the uniformity of the team. Berkeley's CustomInk shirts made them stand out and increased team unity, providing Berkeley the much needed morale to win the Collegiate StarLeague. Plus, the club was able to get a lot of exposure as well! eSports at Berkeley was extremely satisfied to have worked with CustomInk in designing the shirts." - http://esports.berkeley.edu - eSports at Berkeley (Feb 19, 2013)