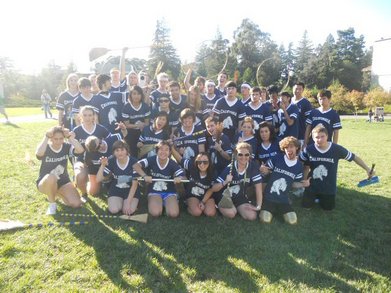 View full-size image
Is this photo a winner?
"The Cal Quidditch team got these personalized jerseys specifically for our first ever Quidditch tournament! Quidditch is a fictional sport played in the Harry Potter series, but colleges around the country and the world have adapted it to become a sport that even muggles and everyday people can play. Our jerseys made us stand out during the tournament (thus attracting a crowd of 500+ spectators) and really and they gave us the confidence we needed to win the trophy and beat Stanford in the very first Big Sweep (spin-off of the Big Game between Cal and Stanford) in recorded history. Thanks CustomInk for getting us some great publicity and making this an event that won't soon be forgotten. Go Bears!" - http://www.quidditchleagueatberkeley.webs.com/ - Quidditch League at Berkeley (Nov 24, 2010)