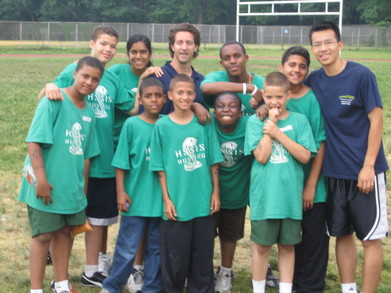 View full-size image
Is this photo a winner?
"Then Henry Street School for International Studies Running Team on the Lower East Side of New York City is comprised of all boys in grades 6, 7, and 10th! The boys were at their final championship track meet of the season in June 2007 when we took this photo. Getting to the track meet was an accomplishment for many because when they joined the team in September 2006, most of them could only run for a few seconds! We did not have an athletic budget so the boys were creative in raising money for the shirts. The CustomInk shirts we got were customized with their last names on the back, and the kids really loved having the strangers in the crowds at races identify them by their last name and cheer for them. Ordering shirts from CustomInk was so fantastic-- they were made well, and their printing lasted through many a wash and many a race-- and my boys were tough on their shirts!" - http://www.henrystreetschool.org - runners (Jun 06, 2007)