Nick Swisher with Me wearing the Swisher Sweet's Shirt 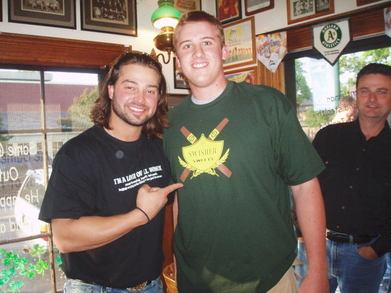 View full-size image
Is this photo a winner?
"As an Oakland A's fan I knew I had to create a shirt for one of my favorite player's, Nick Swisher. I created the shirts based off the cigar company Swisher Sweets and created my own version of their logo. On the back has Swisher's name and number (33). This picture was taking in a Sports Bar after the A's game on Sunday May 12th. The best part about the picture is I got wear the shirt I created with the Swisher himself in the picture. Swisher loved the shirt and autographed one that I have on my wall now and he asked me if I could give him one so he could show the other Oakland A's my creation. A very cool day for me. Thank You CustomInk for making it happen." - http://www.degensportswear.com - DegenSportsWear (May 22, 2007)