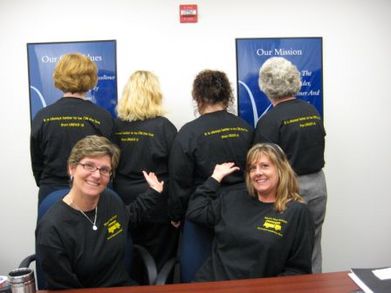 View full-size image
Is this photo a winner?
"The front says: "Atlantic Stars Division" (picture of school bus) "Social Work Leadership Team" The back says: "It is always better to be ON the bus than UNDER it" Our Social Work Team began a meeting talking about someone being "thrown under the bus." It stuck for some reason and became a phrase that we used as often as possible in our communications. We liked it so much that we eventually decided to have the t-shirts made. We love how they turned out!! Now we can show the world how much we love throwing people under the bus:)" - AtlanticStarsDiv (May 12, 2008)