Race for the ROC 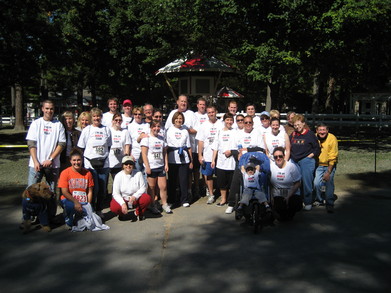 View full-size image
Is this photo a winner?
"This is a photo taken after a charity walk/run for the Saratoga Springs, NY Radiation Oncology Center. The center treated my father when he was diagnosed with Lung Cancer over a year ago. He now survives with one lung, and this 3 mile walk was a huge accomplishment for him as well as support for the ROC that helped in curing my father. Aside from his friends and family being there for the event I had T-shirts made by customink.com that said â€œIâ€™m on Wolfâ€™s Teamâ€. When Wolfgang arrived at the Saratoga Race Track for the walk/run he was surprised to see T-shirts on everyone. It was just what he needed for motivation to complete the distance. Wolf is in the back center of the picture." - Wolf (Nov 13, 2007)