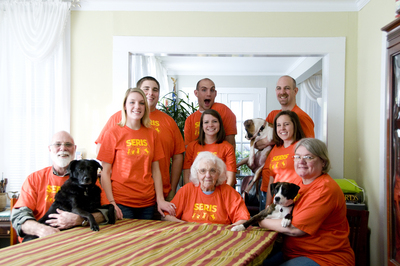 View full-size image
Is this photo a winner?
"My boyfriend recently rescued two boxer puppies in addition to the two cats he already had. The resulting lifestyle is rather zoo-like and jokes quickly formed. Luckily his girlfriend is a graphic designer and his family is supportive, so t-shirts were secretly made and ordered and debuted this past weekend at Thanksgiving. He says it's the best t-shirt ever and was very surprised." - jwiem (Nov 29, 2009)