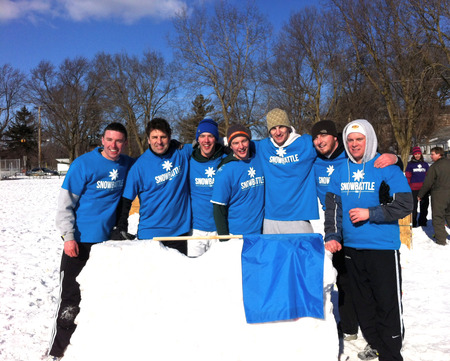 View full-size image
Is this photo a winner?
"Cedarburgâ€™s Winter Festival imported a new event from Japan for the city's 2013 celebration â€“ an organized team snowball fight tournament called SnowBattle. Think dodgeball meets capture the flag meets good old-fashioned snowball fights. It was the first event of its kind in the continental United States, and CustomInk provided all the team shirts. Here's how it works: Two teams of seven players, wearing standard-issue hockey helmets and face guards, meet on a rectangular field that has defensive shields made of snow and flags on each side. A team can win by capturing the opponents' flag or eliminating all the opponents by hitting them with snowballs. Each team gets 270 snowballs per match, created by a custom-made mold that mass-produces 45 perfectly formed snowballs at a time. The teams play for three three-minute periods, with referees officiating. Winter Festival hosted an 8-team co-ed adult tournament on Saturday, February 16, and an 8-team co-ed youth (14-18) tournament on Sunday, February 17. Pictured is the winning team from the adult tournamet, Grown Folks' Bidness!" - http://www.snowbattleusa.com - SnowBattle USA (Mar 03, 2013)