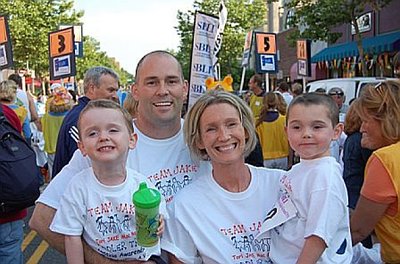 View full-size image
Is this photo a winner?
"Our youngest son has Apraxia. Apraxia is a breakdown in the transmission of messages from the brain to the muscles in the jaw, cheeks, lip, tongue and palate. He knows what he wants to say, but there is a roadblock obstructing the signal from the brain to the mouth. The muscles ignore, or don't hear, what the brain commands. One in five of every 1,000 children are affected each year. Our older son (5 years old) wanted to raise money for Apraxia Awareness and decided to run in a Toddler Trot. In less than 2 weeks we raised over $20,000. We had a lot of support at the race and the Greatest T Shirt to display our cause!" - TeamJake (Jun 18, 2007)