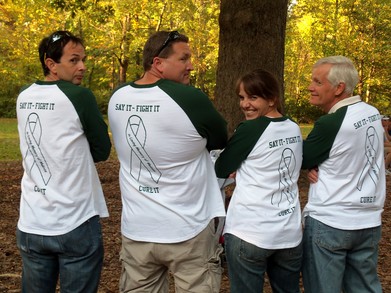 View full-size image
Is this photo a winner?
"This pictures shows a few members of Team STABLM8 who participated in the Reston, Virginia Take Steps for Crohn's & Colitis Walk on October 16, 2011. Take Steps is CCFA's national evening walk and celebration and the nation's largest event dedicated to finding cures for digestive diseases, which affects over 1.4 million American adults and children. What makes this event so special is that we (14 team members in total) walked in memory of Melissa Bealafeld Espinoza, wife, daughter, sister, and close friend, who was diagnosed with ulcerative colitis at the age of 8. For 28 years, Melissa lived with the everyday physical and mental pain and anxiety associated with the disease. She managed the disease with a variety of drugs and was hospitalized with serious flare-ups on numerous occasions. In October 2009, a routine colonoscopy discovered that Melissa had precancerous lesions on her colon. At the same time, a mass was discovered in her liver that was later diagnosed as cholangiocarcinoma (cancer of the bile ducts). Melissa was courageous during her 11 month fight and never gave up hope for a cure. Unfortunately, she lost her battle with the disease on September 29, 2010 - her 36th birthday. These fabulous t-shirts were created and worn to honor her memory and to celebrate her life. We all miss her so much!" - Joslyn Noonan (Oct 30, 2011)