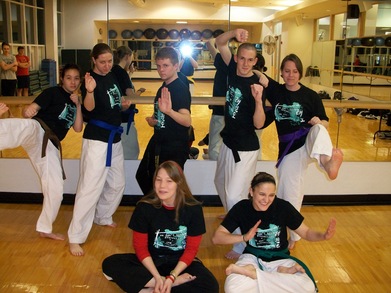 View full-size image
Is this photo a winner?
"Truman Taekwondo is a martial arts group based at Truman State University. It teaches a curriculum based off of two different styles of Taekwondo, World Taekwondo Federation and International Taekwondo Federation, and also incorporates elements from Wushu, a modern form of Kung Fu. The t-shirts were ordered by and given to the members of Truman Taekwondo in order to represent school spirit and unity within the group. The t-shirts are worn during practice, during the day and also during events, both on campus and off campus in order to promote the group and Truman State University itself." - David Churchill (Apr 09, 2011)