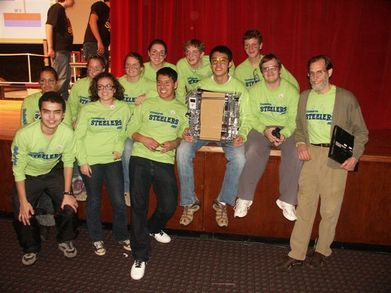 View full-size image
Is this photo a winner?
"The students liked very much the shirts and they stood apart at the competition. They were part of the winning alliance team at the Illinois State Competition, and in addition received the "Inspire Award", which is the highest award presented at the competitions. Their achievement earned them a spot at the World championship event in Atlanta in April, so your shirts will be represented there too. They will also be seen (the shirts) at another regional event in Milwaukee at the end of January. A photo of the team after winning the competition (prior to the awards ceremony) in Illinois." - WinningAllianceTeam (Dec 24, 2009)