Glow Stick it to Cancer! 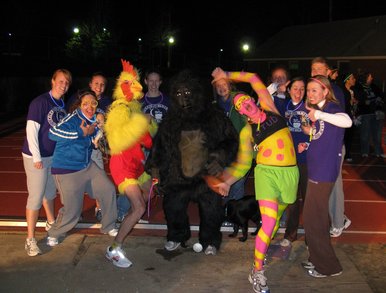 View full-size image
Is this photo a winner?
"On April 15, 2008, my Exercise Science fraternitt (PEK) and I held an event called Glow Stick it to Cancer at Truman State University in Kirksville, MO. It was a 2-mile fun run/walk at night around a track to raise money for Relay for Life and the American Cancer Society. Each of the 300 participants was given glow sticks and neckales. The event was a HUGE success and we raised over $2000! CustomInk helped out tremendously with this event, and helped create some amazing GLOW IN THE DARK t-shirts! Everyone loved them, and the track looked so awesome at night with everyone's glow sticks and glow in the dark shirts! In our lifetime, we will see a cure for cancer, not because we wished for it, but because we worked for it. Cancer is something that affects each and every single one of us on some degree of a personal level. Whether it be ourselves who is fighting the cancer fight, or a parent, a sibling, a relative, a friend, a coworker...we all know someone who is battling a cancer diagnosis. It is onle in coming together as one with events like Glow Stick it to Cancer that we can hope to win the battle against cancer." - http://www2.truman.edu/~sdd209/ - polevltr515 (Jun 19, 2008)