Have you seen these girls? Last known whereabouts Las Vegas 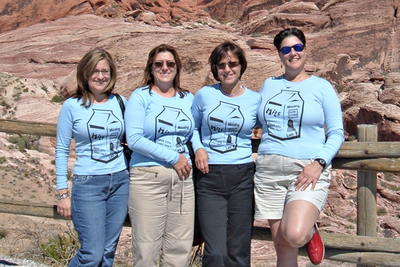 View full-size image
Is this photo a winner?
"This picture was taken on a trip to Las Vegas to celebrate Helene's 40th birthday (second girl from left). As the unfortunate middle child, she managed to get left behind places during family trips and outings when she was a child. So, these shirts were made to commemorate & honor her on her birthday. The front has her picture on the milk carton, her nickname and date of birth, and the text says "Missing - have you seen me?". The back has a nickname for each of us (Helene's says "Missing Some") and the text reads, "Left Behind In: Diner Restroom CT, Gas Station Restroom PA, Ballys Restroom AC, Sleeping it Off USA, and On The Strip NV"." - http://www.imagesbyjda.com - Leni_Bs_B-day (Dec 14, 2006)