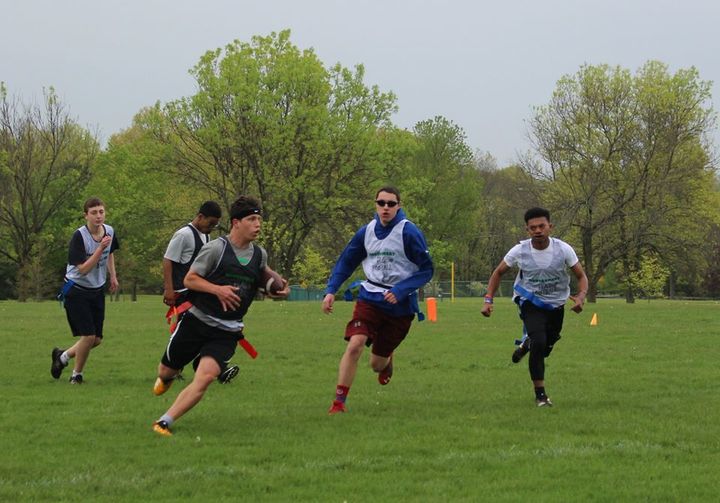 View full-size image
Is this photo a winner?
"In 2007 I became involved with Montgomery Flag Football as a coach for my kids. In 2015 I took over as the Commissioner of league even though my oldest child was graduating high school. For a number of years the league supported kids in K-10th grade which included a 7-10th grade division and uniforms order through NFL Flag. When a group of my 10th graders lamented that they could no longer play, I decided to start a high school division of 10-12th graders and outfitted them with reversible pinnies using my Montgomery Flag Football standardized logo that Custom Inc had been using for other products created for me as gifts for coaches. I had a great start to my initial season this spring with 23 participants! The kids play weekly from mid-April to mid-June and there will be another season next fall and hopefully it will grow each successive spring and fall season. My experience with Custom Inc has been nothing short of fantastic. Over the past couple of years I have been working with Justin Metz out of Irving TX who is apparently my account manager. I say apparently, because Justin has become as much as a friend as anyone that I have never met in person. Justin has worked with me nearly every spring and fall; coming up with new ideas for me to give as gifts to my volunteer coaches with the Montgomery Flag Football logo as well as helping me outfit my referees with custom Montgomery Flag Football shorts. Justin doesn't hesitate to call me when he deems appropriate and even passed on some deadline issues to a co-worker when he was taking time off just to make sure my orders were done timely. I am quite certain I am not the biggest spending customer that Custom Inc has, but Justin treats me as if I am "King of the world." I know there is a Custom Inc "store" in Princeton NJ which is literally the next town south of Montgomery and I have never set foot in the door. That's how much I appreciate all that Justin does for me. " - http://www.montgomeryflag.com - Matt Rosenthal (Apr 30, 2019)