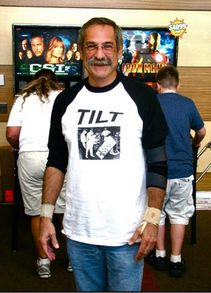 View full-size image
Is this photo a winner?
"The shirt was created for Roger Sharpe the man who overturned the Laws banning Pinball in NYC in 1976 by playing a game before the NY council and proving that Pinball was a game of skill not chance. On the front is Mayor La,Guardia in 1930s smashing Pinball machines on the rear is Roger Sharpe playing a game of Pinball in the Court Room title above his pic is Ball Saved I gave the shirt to Roger who is wearing it in this pic at Pinball Expo " - Pinball Hero (Oct 29, 2011)