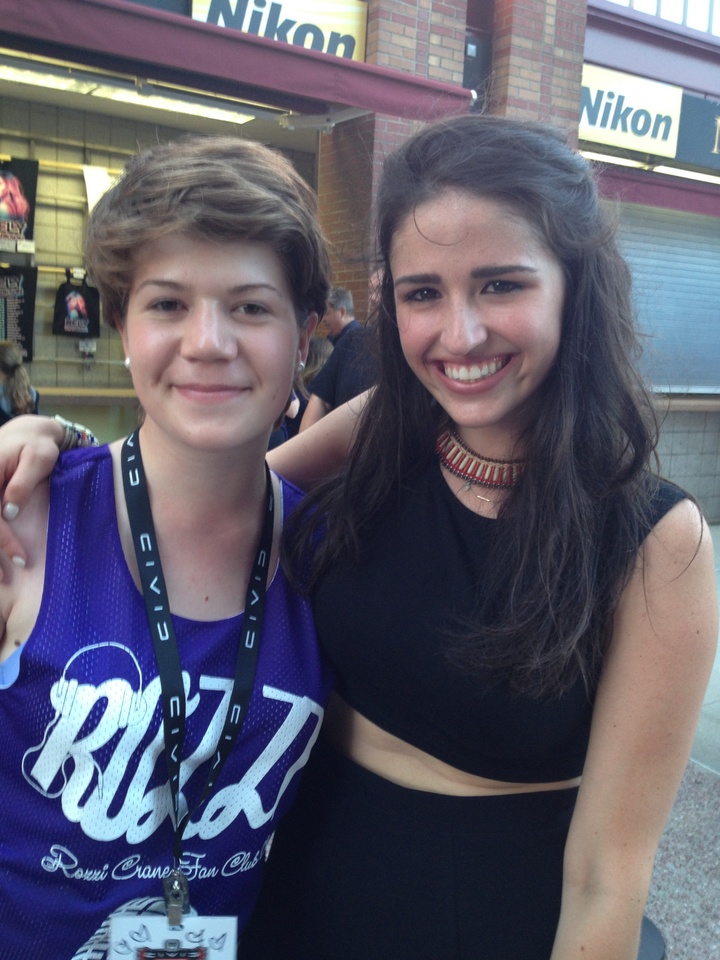 View full-size image
Is this photo a winner?
"Rozzi Crane is a breakout artist who was signed by Adam Levine because of her incredible, unique voice. After seeing her twice in concert on Maroon 5's 2013 Overexposed tour (she did a duet with Adam during their performance of Wake Up Call), I and other Maroon 5 fans absolutely fell in love with her. I got to meet her after one of the concerts, and she was so sweet! She was giving out demos with two of her original songs, and after playing them over and over I fell in love even more. I and my friend Kariggan created a fan page for her on Twitter, and decided that we wanted to support her even more in her upcoming second tour with Maroon 5, during which she would actually be opening for them. We designed these jerseys and with the help of a few awesome twitter friends rounded up enough people to place an order. I got them delivered to my house (When Custom Ink says guaranteed delivery date, they mean it!!!! So amazing. And it rained, so the weather proof bag they put them in was much appreciated) and sent them out to everyone. My Maroon 5 concert was two days after I received them in the mail, and I was so excited to represent Rozzi and show off our design. I handed her one that I'd got just for her onstage, and she showed it off to the whole crowd!!! It was utterly amazing. I got to meet her again just after her set (that's me and her in the picture!) and as always she was so sweet and amazing. I also got to meet her friends and brother (who I gave a jersey to also---he even wore it around over his shirt!!!) and they were SO nice and were asking me a billion questions about how I found out about Rozzi and how I made the jerseys and about my fan page. It was insane. I also met Maroon 5's photographer (who is not only insanely sweet but insanely talented) and even he said he wanted to steal the jersey I gave to Rozzi! Finally, just today, Rozzi tweeted a picture of my jersey and said how they blew her mind. I basically freaked out and have continued to freak out for like 12 hours. She is amazing, and she blows OUR minds. If I won the money towards a custom ink order, I'd use it to order more jerseys and send them to my friends who love Rozzi and really wanted one but were not able to afford one. The friends I've met through being a fan of Maroon 5 and subsequently Rozzi Crane are undoubtedly some of the best and most supportive people I've ever met in my life. They rock! As does Custom Ink. They helped me through the whole process of logistics (putting an artist's name on a product can be risky business!) and my own indecisiveness on certain design aspects. They were amazing and so helpful and I can't thank them enough for helping me get these jerseys in time for my concert! It was one of the best experiences of my life, and I wouldn't trade it for the world. Thank you custom ink!!!!!" - http://twitter.com/rozziscranes - Emsareh (Aug 14, 2013)