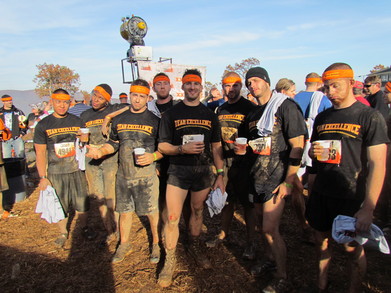 View full-size image
Is this photo a winner?
"This is the after photo of the Tough Mudder Va '11 event. The event was held in Wintergreen, VA. It donates to the Wounded Warrior Project. Myself and a few fellows in this photo are in the Marine Corps. The day we ran this event was also significant to Marine Corps, because in October 23, 1983 in Beirut, Lebanon the Marine Barracks was bombed. My t-shirts paid tribute to that. I was highly impressed with CustomInk, the outcome of the t-shirts was astonishing. Running the ToughMudder we had so many good comments about it. CustomInk did an awesome job." - Team Excellence '11 (Oct 25, 2011)